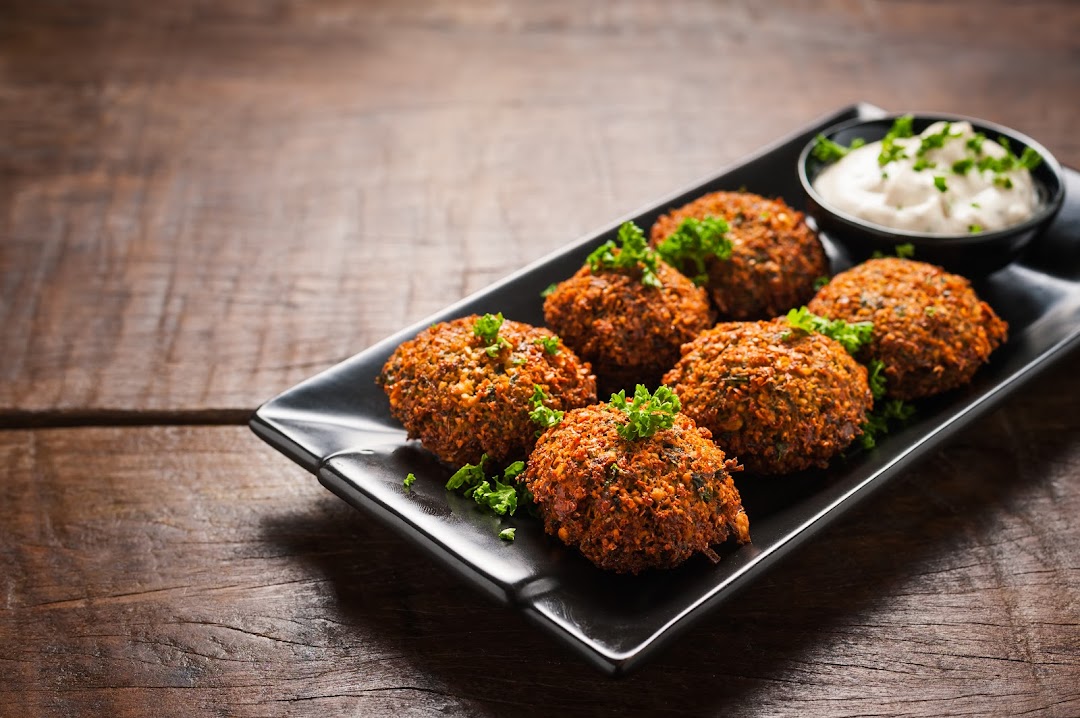 I usually eat here about once a week. The owners are very friendly and the staff is always accommodating to my needs. I love their whitefish salad bagel and bagel with lox. (I'm from NJ so that means something.) I also really like the Beirut breakfast platter. I love Mediterranean food but this week I tried the French toast, which was phenomenal. It was the perfect combination of sweet and savory. I love that they top it with pistachios. The crunch just adds something extra special.

Good food, reliable service, good prices... I really like the salmon plate and order it a lot. Recently went in for brunch and had the lavender pancakes. They were the best pancakes I've ever had!

Solid food with a unique brunch menu. Worth the trek for anyone in the area. Street parking and I think they may have some private parking options. Overall a wonderful meal... I'll be back! (I ate the challah French toast and my MIL had a delicious latte made with oat milk as well as the Reuben.)

Fantastic food for a good price. Always served fast and fresh. The owner is very sweet and you can tell that they really care about the quality of their food. I would recommend this place to anyone who enjoys good food and attentive customer service.

Came by today for some quick brunch. Food was fantastic, as usual. Service was great. The illy coffee was made perfectly. I had the Beirut breakfast - the falafel was AMAZING, the hummus was super flavorful and the bread was perfectly warm. I looove the halloumi cheese too. The olives were so good- I love the pickled too. The pic I posted is when I had already eaten some of it but omg sooo tasty....

A friend and I sat outside on a Saturday and ordered 2 breakfast items. The pancakes were fine, but the French toast was raw inside. When the waitress, who already had a bad reaction to somebody trying to walk in with a cup of coffee (she assumed something was wrong with his coffee when all he wanted was more coffee) asked us how everything was, we showed her the French toast, which we're only able to eat about half of because it was undercooked and the egg was dripping out. She said that you should have just told me, let me give you an order that is cooked properly, which is a good response. I thought we were fine.She came back from the kitchen, presumably after talking to somebody there, telling us that we had not eaten raw eggs, and the French toast is only dipped (not soaked) in the egg. We are sitting there looking at the over soaked item with raw egg dripping out of it, and asked her what is that coming out of the French toast then? She repeated herself about there being no raw egg added only being dipped in the French toast and not soaked. She got mad at my friend, said defensively that she wasn't being defensive, and told her that she should not be looking down on waitresses during covid-19 (something she was not doing anyway), and that she (waitress) makes more money on her other job than my friend does. Meanwhile, she has no idea what my friend does for a living and that's not somebody you tell anybody in any customer facing job.Also, she gave us the wrong check, one from a larger party, but that's an honest mistake.So, I could have written an actual review on my restaurant review website, and I still can, but at least here on google there is a chance of good reviews averaging out mine, if they improve service.Will we ever go back? No.Does Olive have potential? Yes, the pancakes were good, and the French toast would have been good if cooked all the way through. Let's just hope the waitress was just having a bad day, and from here on and everybody gets at least average service. In that case, this could be a restaurant for others to try out of the future. Their location is easy to miss, and it's new, so it definitely could use the business.

My husband and I came here for brunch. Everyone working was so incredibly nice and helpful. All the food was delicious! My husband (who is Lebanese) said it's was the best falafel he has ever had. We split the Beirut breakfast and each got an entree and we loved everything we ate. Such a great value for so much delicious food. Although we were stuffed, we topped off the meal with some fresh coffee and gelato. We cannot wait to return!

Great place for a quick bite. Their falafel is really good. They also have vegetarian and vegan options!

The food was fresh and plentiful. And there was outdoor and indoor seating. I can't wait to try more of their menu.

Shish kabob is excellent with great portions. Chicken Shawarma is even better. Staff is friendly and the owner very inviting.

So, ordered from Olive Express via Grubhub. Ordered a Vegetarian Burrito, Southwestern Eggsrolls, and a Bottle of Diet Dr. Pepper. I also used a Promo Code that saved me $8. The delivery was within a reasonable amount of time. The Burrito was good if medium size, the Southwestern Eggrolls were great if small - though in fairness there were three, and the Diet Dr. Pepper was good.Once again it was one of those meals which was okay for the price. But if I had paid full price I would be less than impressed. So to be honest I have to give a three out of five.Response to the Restaurant's reply - Due to the Promo Code, mentioned in my above review, the total costs from Grubhub for delivery and such was...50 cents. In other words the price had nothing to do with Grubhub.Take that "50 cents" away and the total cost was $15.50, was how much the food cost all by itself. Not bad for great food. BUT if I HAD paid full price it would not had been worth it. Which was the point of my review. Which is why you got three points. Because, in my opinion, $15.50 is STILL too much for what I received. Which was "okay". I understand you didn't like my opinion but to suggest I don't know what I am talking about? Now you get one point.

The chicken shwarma platter is incredible, the breakfast sandwiches are great, and the staff is super friendly. This has been a great addition to the ballston plaza!

I love their Gyros and coffee. I would recommend this restaurant for any one love Good food

The food is good and has the opportunity to be great, but the staff is really lacking. I order a breakfast sandwich with out cheese and it's a 75% chance they're going to mess it up and add cheese.They also have a system where the kitchen staff will just bring the sandwich up to the counter where the front staff is supposed to call out the name for the order. This could work all good and well, if the front staff is paying attention. If they aren't then you're waiting unnecessarily long.

I love this place.... fast casual counter service. It's usually pretty fast and the food is always good. I am a frequent customer and have really come to rely on them for a normal priced and well portioned lunch. I also tried the coffee this AM and wow Illy coffee is totally amazing.

Olive is a wonderful lunch cafe with so many options. Its always hard for me to choose but everything I have tried is fantastic. I love the butter chicken special. The chicken tortilla soup is another fave.the Mediterranean food is delicious.... honestly everything is good.

A great conveniently located cafe! I appreciate that a high quality cafe has finally opened near my office. It's priced reasonably for the area. The service is also really good. I like the salads and usually stop by for my morning coffee. I prefer illy to Starbucks so I'm really happy this places opened up!

Wow! Everything here is amazing and high quality. I especially love that they serve Illy Coffee and all of their sweets come from local bakeries. Their food is delicious. I love the Mediterranean bowls and all of the middle eastern food. The service is amazing. The staff is so friendly an attentive! I highly recommend!PS There are soooo many vegan/vegetarian friendly options here. A great place for lunch!

I was searching for an Illy Coffee Retail store just to grab some coffee before heading to my parent's for Thanksgiving and I stumbled upon Olive Express in Arlington! This crazy because I already love shopping at Olive in Herndon! This is amazing because they are super close to my house in Arlington and they deliver. The owner told me that she will be open after 4 PM soon so I will be sure to order dinner from here all of the time. It's fresh and convenient. Really just an all around great spot.

Ok this may be my favorite lunch spot in the DC area. First of all the vast vegetarian menu is MUCH appreciated. I also try to eat gluten free and there are also many opportunities to modify to meet dietary needs. The menu is halal too so I have brought many friends with me.I really like the veggie plate. Amazing falafel and grape leaves. The hummus is chunky and delicious.Falafel pita also an amazing veggie choice! The French fry combo is an amazing deal.Overall great quality and customer service. I love that the owner is eager to meet dietary restrictions. And the employees are so considerate.

Great spot for a fast and affordable lunch! Good quality and helpful staff.

I love this place! The quality of the food is amazing and they have such a great menu. My favorite would be the Mediterranean food. The staff is kind and my food usually comes out quickly! My favorite thing to order is the Steak Shawarma plate or the Grilled Chicken Panini with Fries. Can't wait to come back and try the gelato... yumm!

Yum!! I love that Olive Express is open in Arlington finally! Everything on the menu is high quality and delicious. I like the Chicken Curry plate if I'm really hungry. The butter chicken special is also phenomenal. The Ahi Tuna bowl is also one of my favorites for when I want something light. I recently had an affagatto (coffee with vanilla gelato) and it was AMAZING. The gelato is all fresh and they serve Illy coffee.Oh did I mention everything is at a reasonable price? And the staff is helpful and kind.