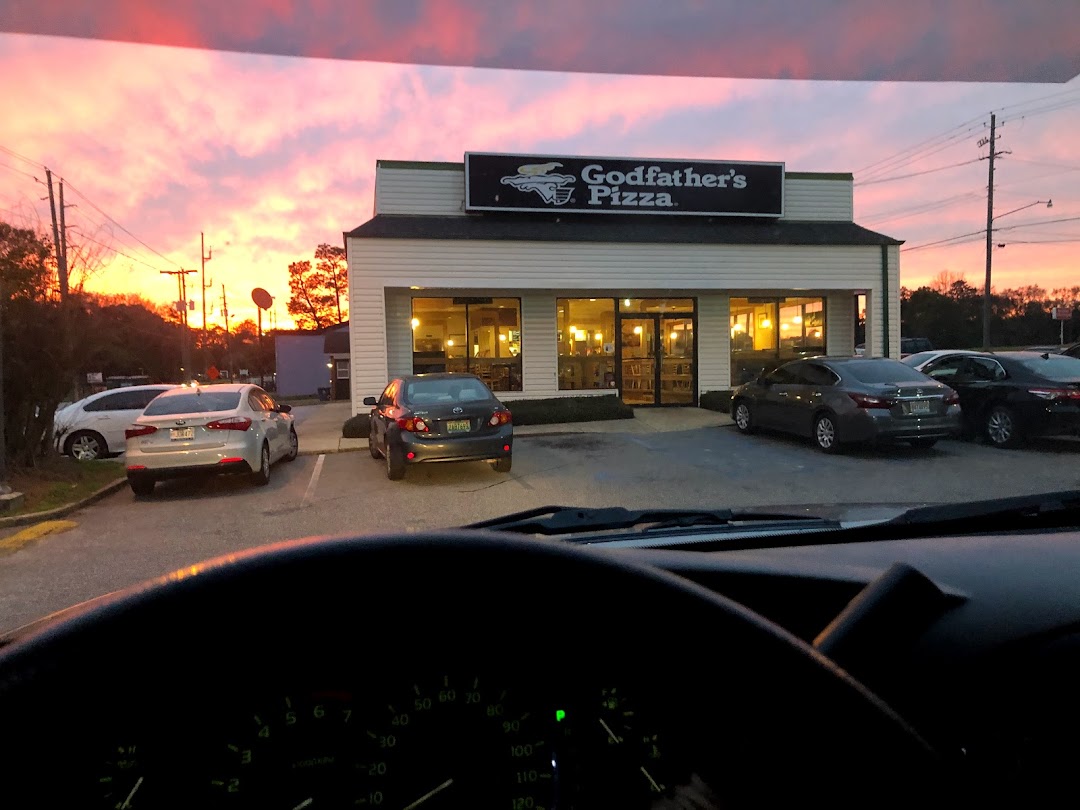 My wife attempted to order online but the website Friday 6:20 9/18/20. Website said all locations were closed. My wife didn't contact me in time before I arrived to tell me they were closed. So I arrived at the store & saw the parking lot was packed and many customers were inside but the picking up orders. The website obviously wouldn't allow her to order so Godfathers lost a customer.

The locals here love this place so I decided to try it since I love pizza. I ordered the classic mini and it was absolutely delicious and filling. I also had the salad bar (not pictured) and it was pretty decent as well. I will definitely be back if I visit Mobile again or passing through to get to New Orleans or Biloxi.

I love how polite and friendly the staff are !!! How hot fresh and awesome the food taste..favor taco and specialty pizza!!

Greatest buffet for your tummy. The taco pizza is quite heavenly!

Pizza and cheese sticks were great! Very good to be thin crust. Service was quick and pretty decent. If you love pizza definitely a place to come to while in or traveling through mobile!

The salad bar had lettuce pickles olives huge pieces of cucumber and bell peppers. No cheese no other things but pickled peppers and half of the bar was nothing but different dressings. Got the huge pieces of cucumber and the only cutlery they had were flimsy plastic forks. Could not cut up the cucumber nor the pizza. I have a problem with my front teeth and could not bite anything and without a sturdy fork or knife I could not cut anything. The supreme pizza was very greasy and thin crust was soggy

It's great to eat at a actual Godfathers restaurant. They are becoming extinct. I enjoyed relaxing there and eating their delicious Taco Pizza. The service from staff was great too.

The food came out in a timely manner and it was hot.

If you're child of the 1980's like me – you remember the time when Godfather's Pizza was the best Pizza Chain in the Country. Godfather's was originally created by Willy Theisen in 1973 in Omaha, Nebraska - and by 1985 they were the 3rd Largest Pizza Chain in America; however, regardless of how successful Godfather's seemed, it was actually falling apart and on the verge of bankruptcy! Over the years, Godfather's had slowly created an overly complicated and costly menu, all of the franchises were completely disassociated from each other, and they had an advertising campaign that was killing the restaurant. In 1986, Godfather's was sold to Pillsbury as part of deal where Pillsbury was actually purchasing 300 Burger Kings and Godfather's Pizza was just thrown in for free! Pillsbury, then turned the restaurant chain over to Herman Cain – who later ran for President of the United States in 2012. Herman Cain did turn the restaurant around, he did unify the franchises, simplified the menu and return Godfather's to profitability, but sadly – it has never returned to the No. 3 spot in America, although, in my opinion…they should be No.1!!!

Not the same as my childhood Godfather's, but what ever is? Still pretty good pizza. Staff need to work on their attitudes and customer service skills though.

We took 2 from Alabama to Florida. They cooked the pizzas half way so we could freeze them and finish baking them when we got home. How many places would do that for you? On top of being the best pizza in any state. Love the people and the food.

I worked at Godfather's pizza in the 80's and the stores eventually closed down in the area. Went to Mobile for some business and saw the sign. It had been about twenty years since I had my last Godfather's pie and it didn't disappoint. The Classic is still one of my favorite pizzas. Moffet Rd. location.

Me and my family decided to order Godfather's after not eating it, for over 5 years. Nothing has changed! The pizza was awesome with the same recipe they have been using for years.

Everything we got was wonderful, it was like heaven in a box. EXCELLENT service from a girl named Megan, who went above and beyond to make sure we had a pleasant experience. Y'all have earned a customer for life.

I was underwhelmed with my experience. The quality of the food and the restaurant has went down. They were out of plates so we had to use potatoe paper plates. The pizza looked as if it had been sitting there for hours. There were trash on several of the tables like the bust person just said forget it. I won't be going back or ordering take out anymore.

We walked in around 11:30 am. Food was hot, tasted great and restaurant was very clean. The salad bar was clean and set up well. The only thing that could be better on the salad bar is they could offer some sort of cheese variety. Other than that the food was exceptional. My grandchildren love ️ Godfather's pizza.

Most of the time when I visit family in Alabama we order pizza from here. The pizza is always amazing. The staff are great and they are always alert. And ready to take your order.

Still don't like it but my nephew loves it

The best pizza ever!

Pizza was super yummyyyyyyy... the employee that assisted my bf didnt seem like she wanted to be there, but other than that, was good :)

Decent food and the buffet is worth every penny

Godfather's pizza is STILL by far the best pizza place in Mobile, AL. Many try to imitate but, none can duplicate Godfather's. The pricing is a littke more than most common pizza places, however, the taste is irresistible. Always hot and fresh. Never a long wait. So, for the process it is WELL worth it. If ever in mobile as a tourist visiting and you need a great pizza place, then stop by Godfathers they won't disappoint!

Great customer service. Manager Oscar was very nice. Food was hot and in a timely matter.

Love this restaurant! They were awesome to us and our kids at the buffet on Monday. We certainly will be back.

The pies aren't skipped on, full of toppings!

Great pizza and salad bar, as per the norm!

4/15/19 just tried to order for a delivery but they have no drivers sad day when you used to work for a delivery company and u see that probably wont order here at all because of that.PS. guy on the phone very rude and didn't know why they had no driver for the entire day!!!

The freshest and fastest pizza and cheese bread! Everyone loved it. My grandkids had never been to Godfathers before! Tonight they're telling mom and dad it's their new favorite place!

Since my childhood Godfathers has consistently been the best (chain) pizza I've ever had!!

Great service and friendly people..love workers there they had very clean and inviting.

My visit to Grandfather's pizza, was nice. I went during the lunch buffet hours. The pizza bar was constantly stocked with fresh pizza.

Always great pizza!! The people working there looked so unhappy but the food was great

The pizza is excellent, I had saw a commercial for them in high school, never had an opportunity to get any till now, great pizza, I wish they still had the pizza that was in the add, but that was over 20 years ago

Mannnnnnnnnnnnn they were amazing!!!! The food was so fresh and delicious we're definitely going back

Omg yummmmm!This is a mini with everything on it.

High priced and drinks are even higher

Very busy night but my order to go was ready in less than 20 minutes.

I enjoyed the Lunch Buffett, met my hubby for a lunch date today.

Wasn't nothing on the Buffett for 11 dollars should just bought a pizza.

The best pizza of all time

They can't help it, just as good as Domino's. Not a true Italian pie!

Okay buffy. Need to keep the pizzas ready at all times.

I totally enjoyed my stay at Godfather's Pizza this afternoon

Taco pizza is the bomb.

Great food and the staff was very friendly

AWESOME STAFF!!! The manager was very knowledgeable in pizza and she has a sense of humor! I love that! Not having to feel like I'm talking to a robot. Amazing quality in pizza as well. I hope they never get rid of this location!!!

Cheap quality, over priced. Pizza was dry, cheesey bread was over done, and the Italian monkey bread was burnt. I would recommend any other pizza chain; Little Ceaser's has better quality control.

I ordered a mini chicken bacon ranch and it took 30 minutes to receive my order go my table. At any given time at least 2-3 employees were on their phone. This is unacceptable. I wont be going back

In my opinion the best pizza place in Mobile. It's only two in Mobile now . Wish it we're more because both locations are far from my house.

I LOVE the pizza at Godfathers

Taste like it did back in the day!! Great no wait lunch time buffet. Do it.

The BEST pizza ever. Need to open up a Godfather's Pizza in North West Arkansas.

While visiting family on my FIRST visit to Mobile Alabama I noticed Godfather's Pizza! I was so excited because I hadn't seen one since I left Denver 20 years ago. The pizza was GREAT same as I remember but the customer service was poor. I was told I couldn't get salad because the utensils were already taken away, although it was 2 hours before closing. I felt rushed by the "person in charge", she seemed to want to get back to her cell phone because after we ordered she stood right at the counter scrolling away! I'm a stickler for customer service so this truly bothered me. Bad representation of the company and the city!

Lunch buffet...taco pizza is the bomb...food was so on point. This godfather has the best cooks

Very very u professional manager in all. Talk to you nasty , not frienfdly, laughs and play with other employess while you giving a order. Just totally unprofessional i wish i could give a no star.

The pizza was excellent, love it

Staff was friendly. Food. Was good and prices are amazing. Buffet is from 11am to 1pm can't beat it... Yes. Eat here.

I have to say the woman working the register was so sweet and friendly it left me with a big smile that customer service is not completely dead.

The cooks and staff are amazing. Very friendly and the food is great!

Great food for the price, the server (was very nice; evening shift),greeted us with a "HELLO"... "WELCOME to GODFATHER'S", which was appreciated. I no longer patronize certain local establishments due to the "bad attitude" or lack of customer service, of the Server, etc. The food was GREAT here, as well as the service.I have experienced, many YOUNGER employee's DO NOT CARE to show the appropriate Customer Service interactions; I feel their Managers should take notice, then have them retrained.

Just ate some pizza from Godfathers and it was delicious!!

It's a chain, but it has the best pizza out of just about any chain pizza place I can think of. I generally get my pizza to go, but they also have an eat in buffet. The pizza is good, greasy, flavourful, and generally covered with a great number of toppings. My girlfriend had never been here before, but now begs to go whenever she's in town. I recommend the bacon cheeseburger pizza, it's the best.

You would just have to taste a Godfathers pizza