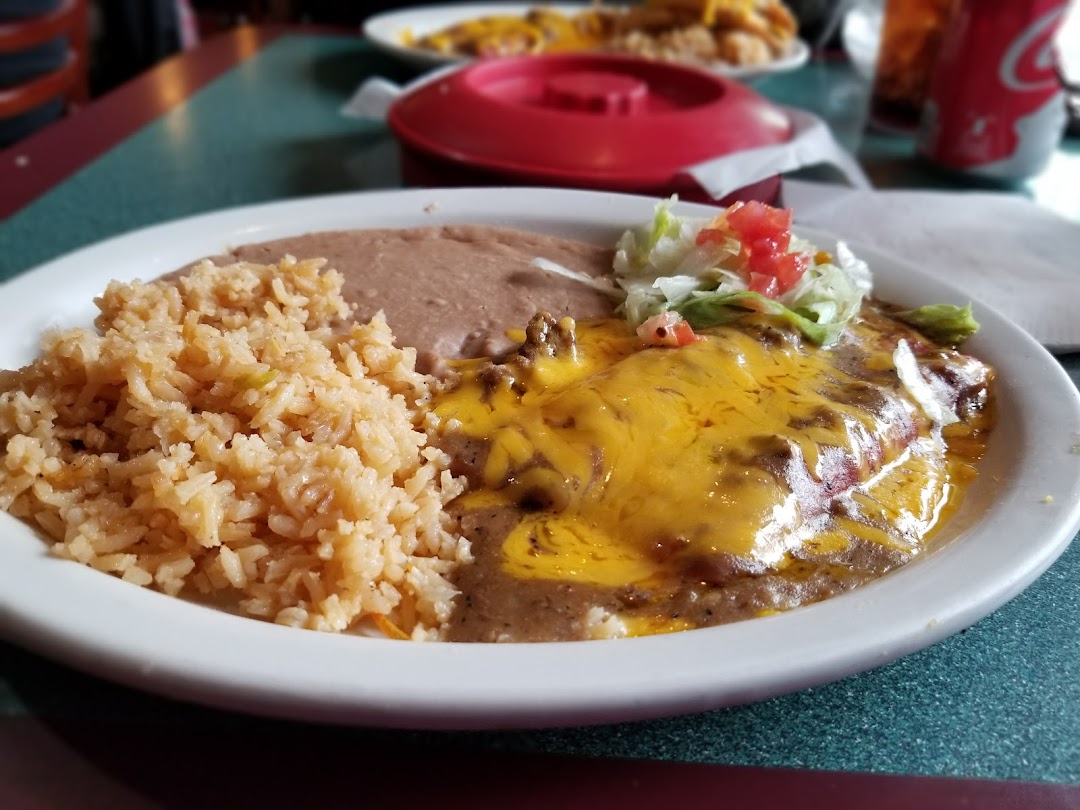 Sweet tea not sweet enough for Texas. Papa ranchera tacos too greasy. Country and egg was perfect according to my pal. Bean and cheese had a good Bean to cheese ratio according to said pal.

Had the carne guisada plate and a sweet tea!!!! It's was good plate but tortillas could have been better️ Hey but all the pretty senorita's made up for everything!!!

Food was fresh an yummy. Tortillas are a bit hard not as fluffy an lite. Service was friendly an fast, very clean.

Friendly staff delicious food and it's never overcrowded...great place to dine. Will definitely rate this 5 stars !

This was the worst experience my girlfriend & I have ever had at Teresita's. Her shrimp plate was over cooked, the shrimp was tough & chewy. My beef quesadilla plate had so much oil & fat I couldn't even eat the second quesadilla. When we had told the employees & the lady at the register didn't care either. I'm upset at the fact I wasted money on terrible food & terrible customer service.

Service was great. Food was delicious. Our waitress Reyna was very friendly, and fast. Restrooms were clean. Drove 30 min to eat here.

Just a hole in the joint. But the service was good. The fideo aas the special and it was one of best I've ever had.

Didn't really like the Chicken Fried steak, it was too much bread

Teresita's was OUTSTANDING!!! Quick customer service, food was excellent and arrived to our table quickly. This is a definite lunch rotation establishment.

Service and food are excellent

Good place to meet and eat for breakfast or any meal of the day. Be sure to get there before they close. Friendly staff and clean environment. Good food

First time visit and it was fantastic ! The parking lot scared us a bit, since it was packed BUT we were seated immediately and didn't have to wait long at all for our food. I ordered the cheese enchiladas and they did not disappoint! The gravy was, I believe, carne guisada and the flavors together were excellent.

Nothing was really amazing in flavor but the feel of the atmosphere was authentic. Fairly prices Carnitas were cubed pork chops salsa is mediocre. Staff nice

The Host and Waitresses were absolutely amazing. So professional, kind and very polite. The service was the cherry on top but the food is the BOMB. JUST GREAT

Place looks amazing , staff is courteous & friendly but the food I'm gonna say the tacos are a hit but we got the nachos Grande and they need a different tortilla chip or way they assemble them , it may be they need a new cook or brands they are using are not very good , the cheese bit flavorful and they chips just soggy & dry is that actually possible the portion is off & the price , I say stick to the tacos as am I and it will be ok

It is not that good and the portion are small.

This the 3rd time ive gone here for tacos and its gonna be my last! The tortillas are hard no flavor, the food needs flavor or atleast some salt. So yea i dont recommend.

Food is not great or good. Was served cold enchiladas which in turn gave me a stomach ache. Most guys come here for the girls not the food. Will not be coming back.

Food was good, not expensive and workers were very polite.

Prices are fair for good food and good service from

Service was great food was the same as service. Highly recommended

Nothing to complain about the service was good,food was delicious and place was clean.

Good place for tasty mexican food. Service is consistently above par. This place has a good design.

Had been wanting to go there did,was very disappointed ordered MexicanPlate to Me Enchiladas with no onionsare not Enchiladas the Taco meatwas Icy cold just lettuce. not piece of diced tomato. REAL TRUTH. THE FOODLOOKED LIKE,TASTED LIKE A SLOP!!ALOT OF RESTAURANTS ARE DOINGTHE SAME THINGS.!!!! GOING TO HAVE TO MAKE MY OWN 4 CORDON BLUE COOKING!!!ANTHONY BOURDAIN,I MISS YOU!!R.I.P, GIL

So my boyfriend and I just came from picking up nachos at this restaurant. We chose the 'super nachos' for $8.99. We waited for approximately 20 minutes until it was ready. The service was bad, first off. And since we ordered it To Go, I noticed that it felt really light as we were walking back to our vehicle. So we got home & the first things we noticed when we opened the To Go plate, (which was also a wrong plate) was how little the amount it was and how we can tell it was microwaved. There was like 15 chips, at most, on our plate. Which is definitely not good. It sucked and we will not be going back. Which is a shame because we live near by and its the closest mexican restaurant near us.

It was very good,clean and nice staff who were friendly. Well priced.

First time here, service is fast, food is good and we got unlimited chips and salsa lol

One pf my favorite Eastside staples!

I go there every morning do to some good breakfast tacos

Wasn't impressed by tacos; portions of the filling was skimpy and I've tasted much better at other establishments. For a cup of ice water to go they charged $1 like seriously! To top it off I wasn't given a receipt after paying for my order, I was so irritated n just wanted to leave, first impression was a bad impression!

Friendly wait staff and the food is second to none.

Excellent food and good service I love to go

Had lunch at this restraunt and ordered the cheese burger plate that comes with fries and a drink. The burger had a small but unusual taste to it like the grill hadn't been properly cleaned. The waitress was attentive but noticed she was mopping the the restraunt floor while handling food. Overall I wasn't pleased with the restraunt especially when it came time to pay the bill. I was charged $10.90 for a freaking burger,fries n drink. Wow!!!! I did leave the waitress a $5.00 tip I'd recommend eating at McDonald's and getting ur money's worth.

I don't agree with he time that they close

Food is just ok!!! Not crowded at lunch time! Sweet tea is terrible!!! Probably won't go back! Been there 3 times and STILL not impressed!!!

The food was great. Thank you for a good meal.

The service was low quality. The owner doesn't put the customer's needs first. She can't split a check or compromise with the customer. In general, it was an awful experience would not recommend this place.

It's better than any Mexican place compared to Utah for Sure, don't expect authentic Food, its Tex Mex, that means it has American Influence on everything, but its Not Taco Bell low quality either.

Great food, and they did a nice job remodeling the exterior

Service is always friendly and fast. Love this place, the did is delicious

Amazing service and food was delicious

Very good food I go there all the time

My dad and I eat here all the time. Great place is pretty busy sometimes and the food isn't too bad either for the price and the waitresses are pretty attentive. I hardly ever have an empty glass of tea here.

Not good seasoning, regreat our breakfast.But they do try to be nice!

Waitress (that wears glasses) is sooo rude. Anytime I asked her for something she told me how busy she was and walked away. She never brought me a tea refill. When I paid at the counter I asked her for a refill to go and she poured my melted ice in the to-go cup and said that if she didn't do that she'd charge me for another drink. Rude!

The service was great, the owner was very nice and attentive. The food was great and will go back again.

Good food and above all the service is very good

HORRIBLE SERVICE!! Very unprofessional. Went to go check out and the lady overcharged my card to make sure she received her tip, which she included extra!!! Yes, you work for tips but service was bad and food was flavorless. Never coming back!!

Friendly staff and Owner ,..Delicious Food all the time...... Thanks Guy's...Favorite lunch place...

Awesome place to go to get tacos at 430am when everyone else is closed, plus the prices and the food are great.

Food and service were excellent

If you are super hungry stop here. I had a torta and it was ok.

The best place to go eat can waith to go back

Good home made tacos and I will return to this place.